So far we have a basic understanding of statements such as return within methods as well as booleans, but there’s lot we haven’t covered. Before we get into creating DLL files and using them in our programs, you should have a basic understanding of the most common statements in programming, especially .NET programming. Let’s take a look at these main few in specific for now:

Your condition is to be wrapped within parentheses, in the sense of something like (a == b) or ((a == b) || (b == c)) If your if statement only has one preceding line of code, you don’t have to wrap it in curly brackets, otherwise the entire code block has to be wrapped in quotes.

For example, either of these two things would work:

If the symbols don’t make sense right now, > means greater than, -= takes the value of the variable before it and then subtracts the variable that comes after it. == checks if two variables have the same value, || means or, letting us execute our if statement if one or another or multiple statements or true, whereas && means and, which lets the statement execute if multiple conditions are true. We’ll talk more about operators in another lesson, but for now you can take a look at a good list of programming operators here (all of which work in C#).

Now that we’ve covered if, let’s talk about else. The easiest way to think about else statements would be to think of the word otherwise. They’re only written after if statements (and else-if), and also follow the one-line rule with curly brackets, but for now or at least for example purposes I’ll demonstrate them with brackets. In the case of our grocery store question, think of it like “If you have 8 dollars, buy 2 gallons. Otherwise buy 1 gallon.”

To write that, let’s say this:

Lastly, you can attach if statements to else’s, also known as an else-if statement. These always should go in-between your starting if statement and your ending else statement, and are used especially for optimizing your program to be as efficient as possible by making a program only check one if block rather than multiple if blocks. With our example again, this would be sort of like: “If you have 8 dollars, buy 3 gallons. Otherwise, if you have 6 dollars, buy 2 gallons. Otherwise buy 1 gallon.”

And of course the code:

Now let’s move on from if and else statements.

If you want to use it for debugging/error-testing however, you would usually write them as so:

Loops: Using loop statements allows us to execute blocks of code multiple amounts of times, usually based on the length of something such as numbers in a data file, the size of a multidimensional array in which you would use nested loops, or just simply re-executing certain methods or events.

Now, to write that out:

In most cases, a general while loop is written in either of these two ways:

Or if we were to use numbers:

Now that you understand how to use statements, let’s make our first DLL utilizing them!

To start working on our first DLL, we need to create a Class Library project in Visual Studio. 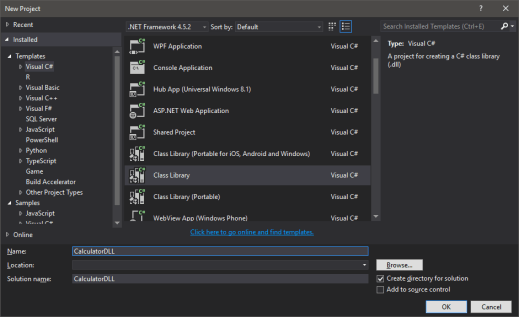 If you’re writing your code from scratch, or you’re unsure if you did everything right, your current starting code should look like this:

Now, for our calculator, let’s add 4 basic methods: add, subtract, multiply, and divide, all of which should return a double. They should take two doubles: a and b. Since our class isn’t going to be using private data, these methods can be static or not, but for now let’s just make them not static, and all 4 should be public. Make them return their respective function, and you’re good to go.

To rebrief, your methods should look as follows: 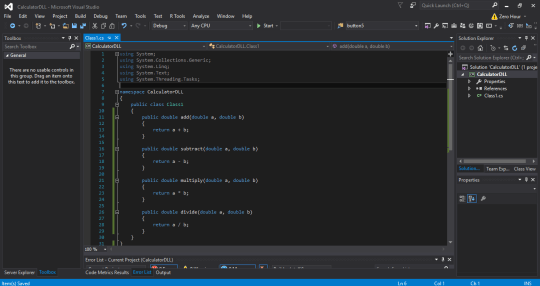 Now that we have all of our methods written, up at the top click Build, then hit Build CalculatorDLL. After the program is finished building, your newly generated DLL file will be sitting in the debug folder of the solution inside of the bin. (Should be something like “CalculatorDLL\CalculatorDLL\bin\Debug”)

Make up a new console application, call it whatever you’d like, and let’s add the new DLL to our references. To do so, in the Solution Explorer, right click References, click Add Reference, then click Browse, and then hit the Browse… button and navigate to the folder of your new DLL, which should be named CalculatorDLL.dll, then hit Add and OK. 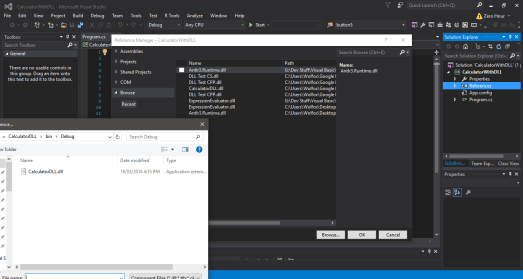 At the top of your new console application, up by your using statements, type using CalculatorDLL; and you’ve now imported all of our methods!

Once you’ve got everything set up, let’s test things out by presetting two doubles to use. These can be named anything of course, since they’ll be going into our methods to be printed off. Afterwards, we have to create a new class of our DLL, set up just as any other class, in the form Class1 Calc = new Class1(); where Class1 is the name of our main class in the namespace of our DLL. We can now call our methods like any other class method, like Calc.add(num1,num2); or Calc.multiply(num1,num2);.

To test each one of our methods, let’s try something like this: 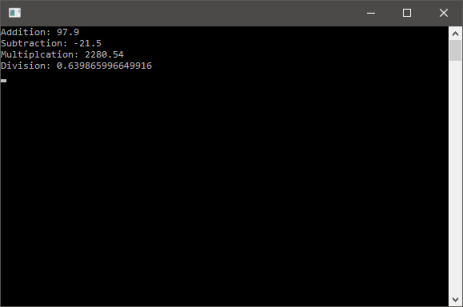 Run your program and everything should work great! Since you now understand the basics of C#, you should be ready to start getting into real programs, which means in the next lesson we’ll dive into making Windows Form Programs! Which of course, we’ll implement our new DLL into, and soon some of our newly learned statements such as if statements and loops.